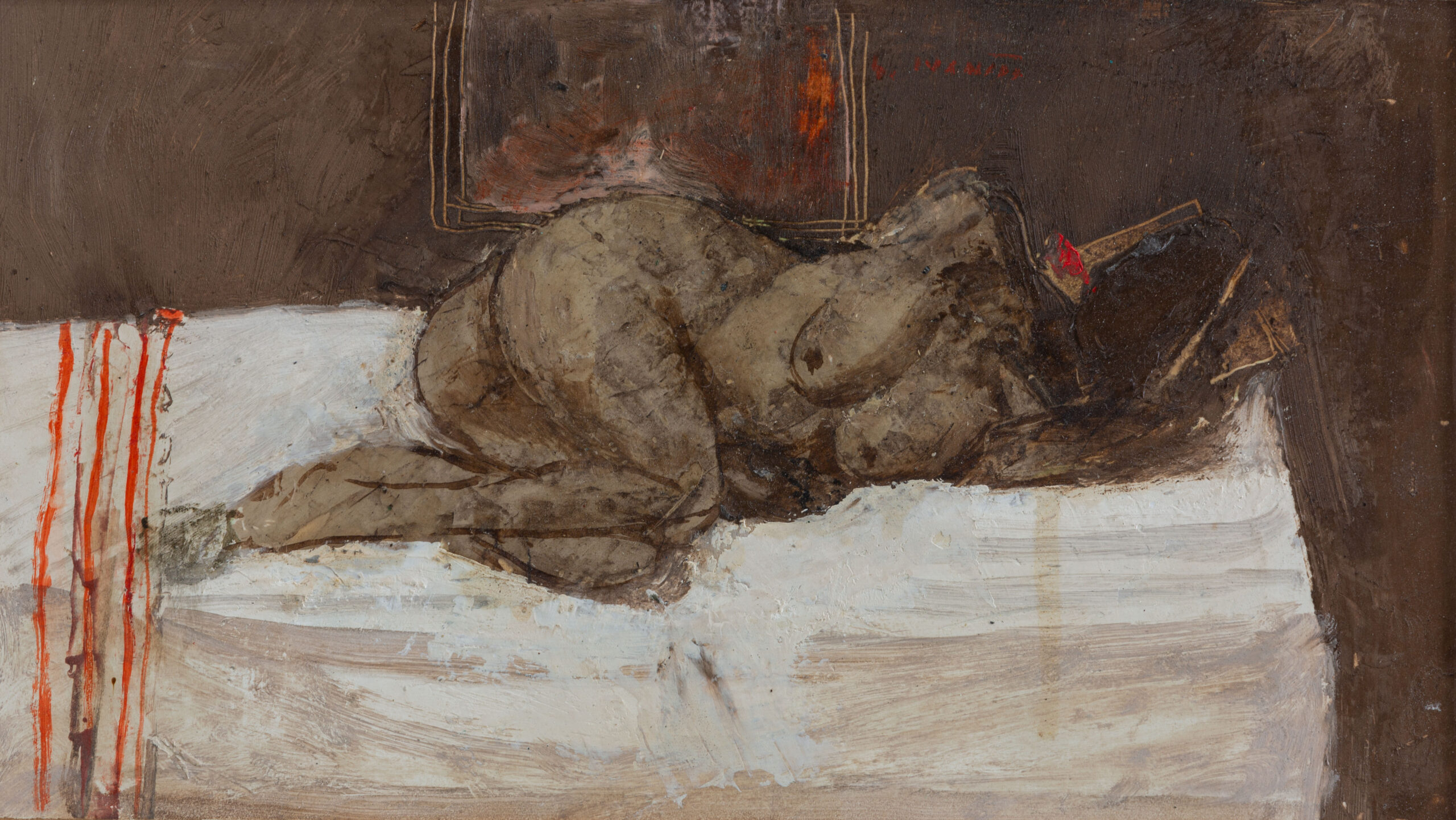 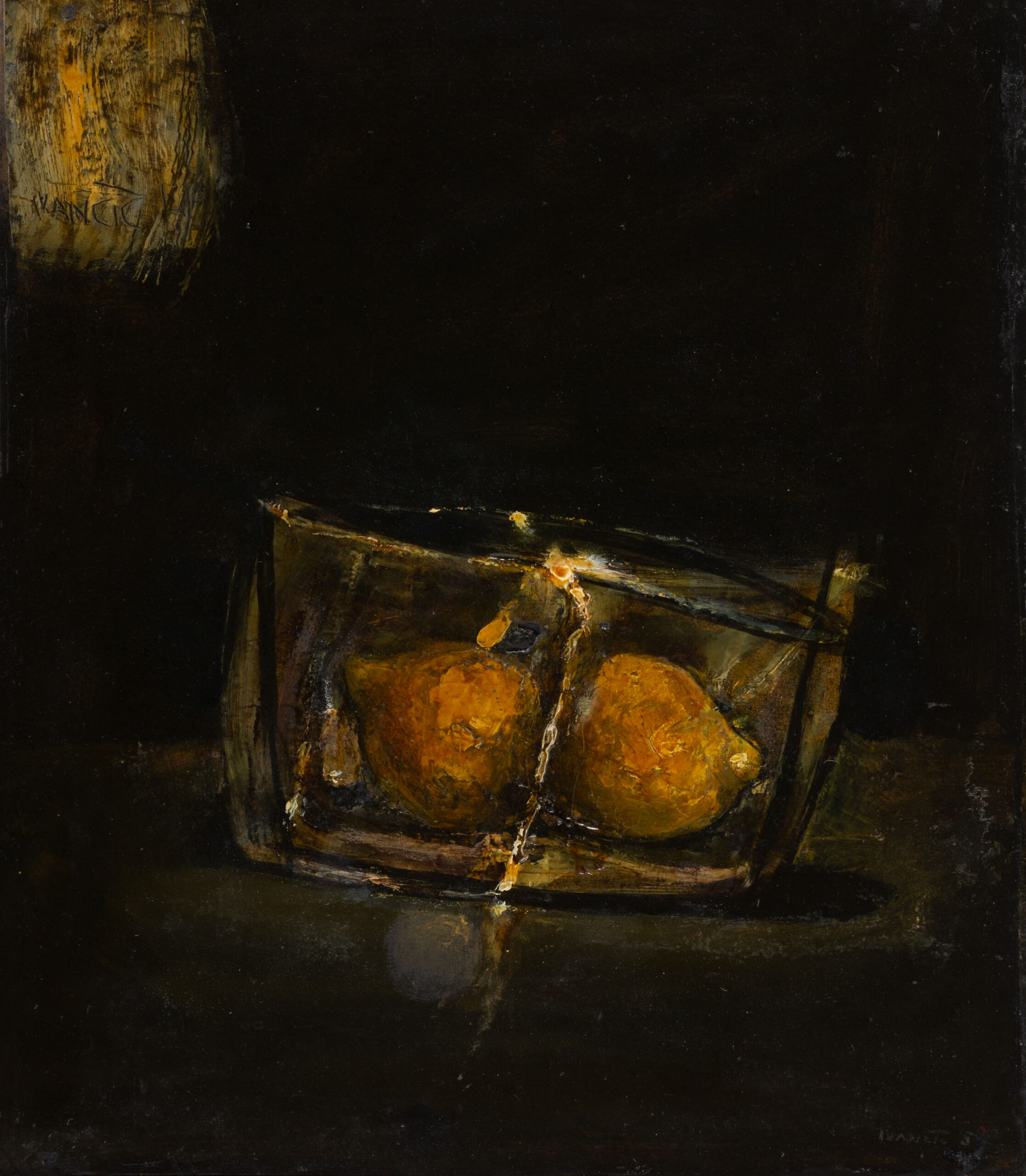 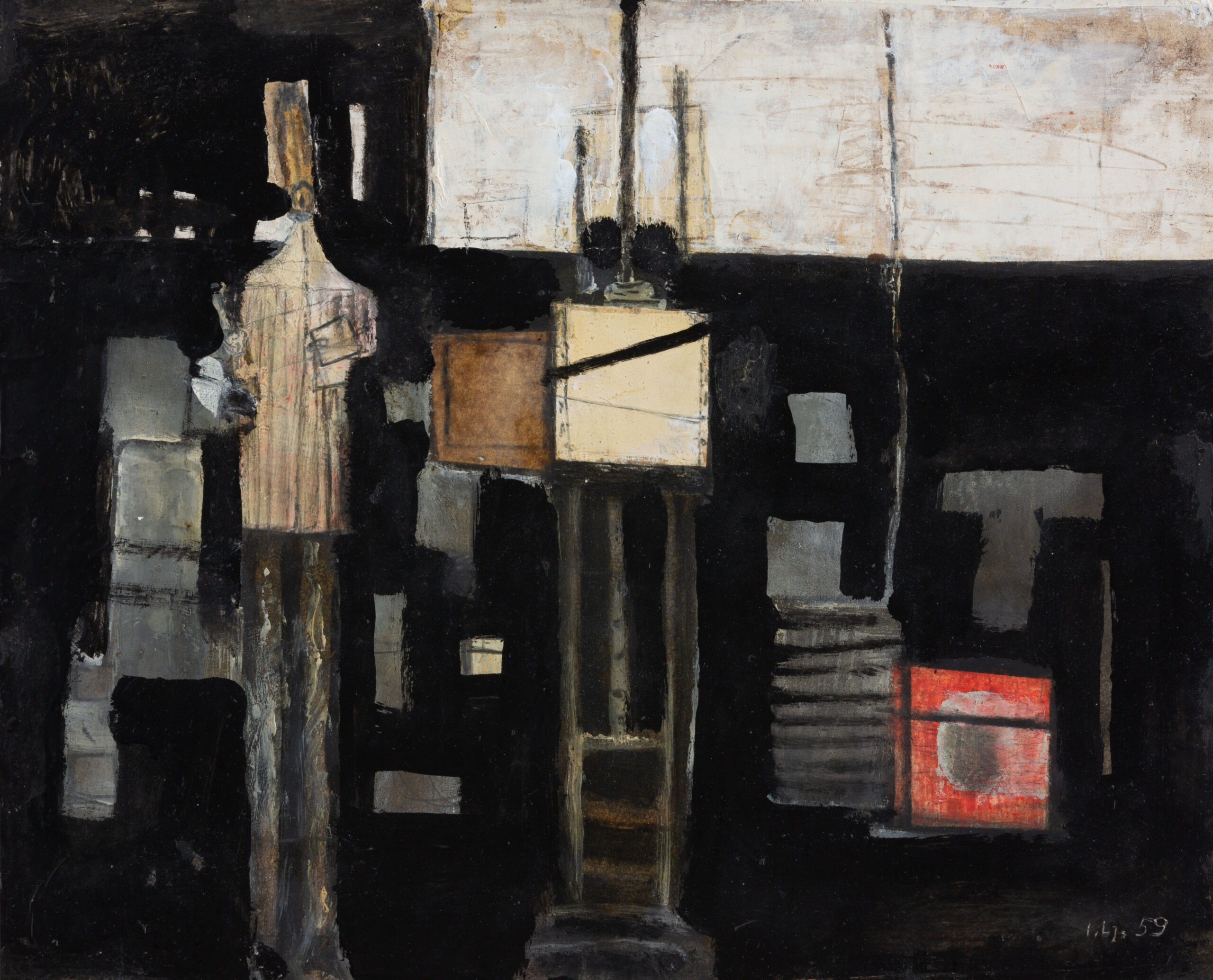 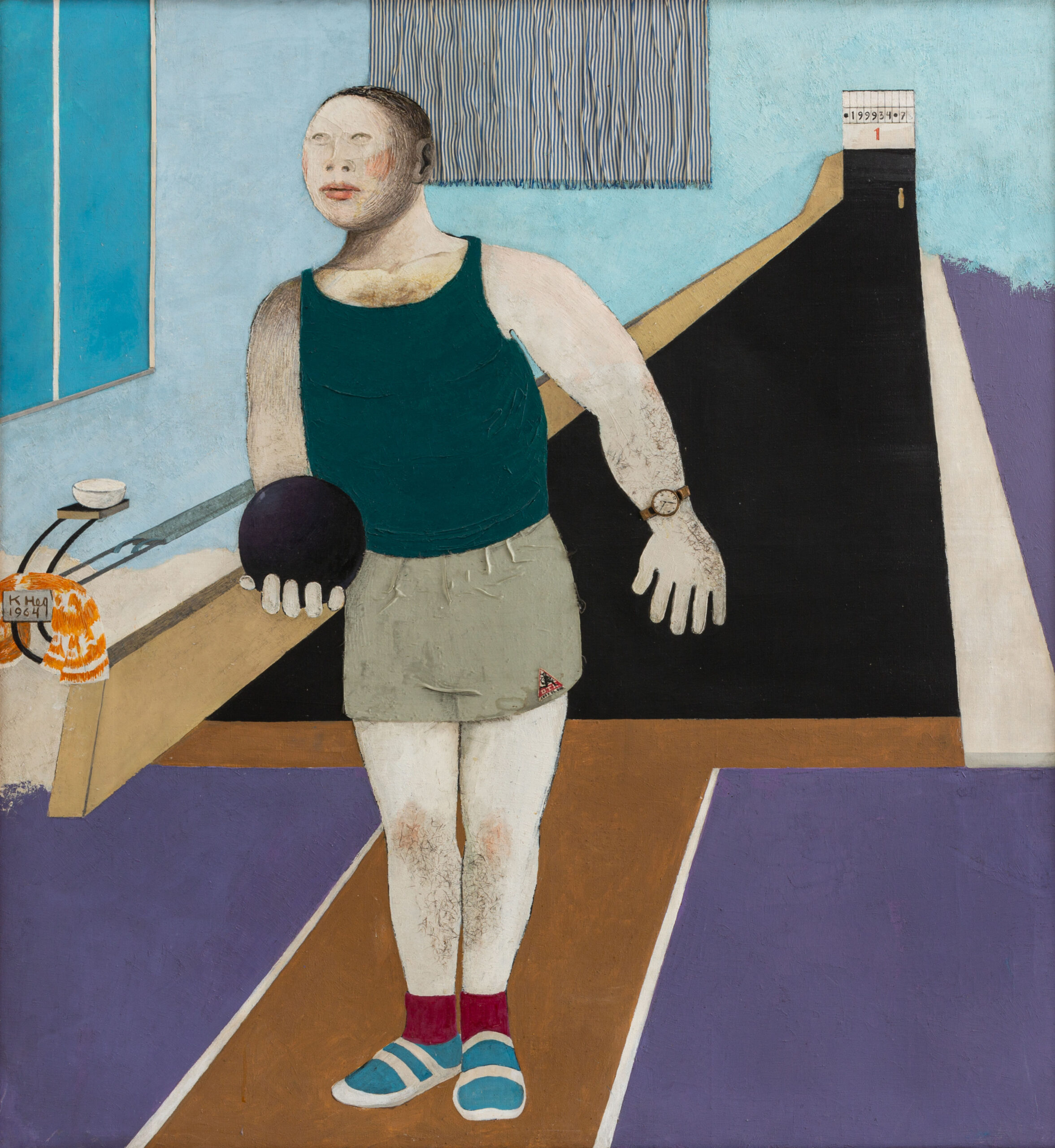 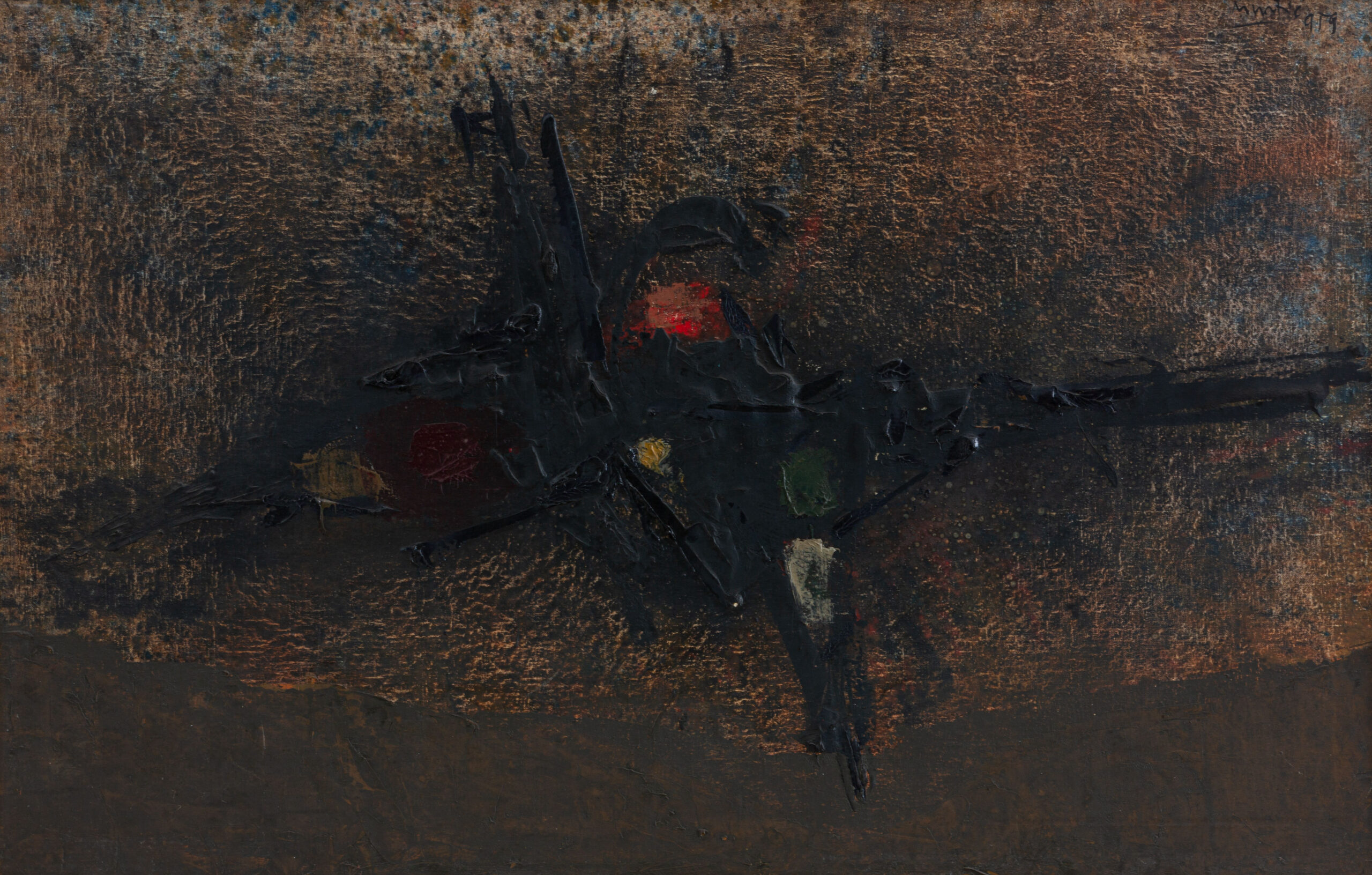 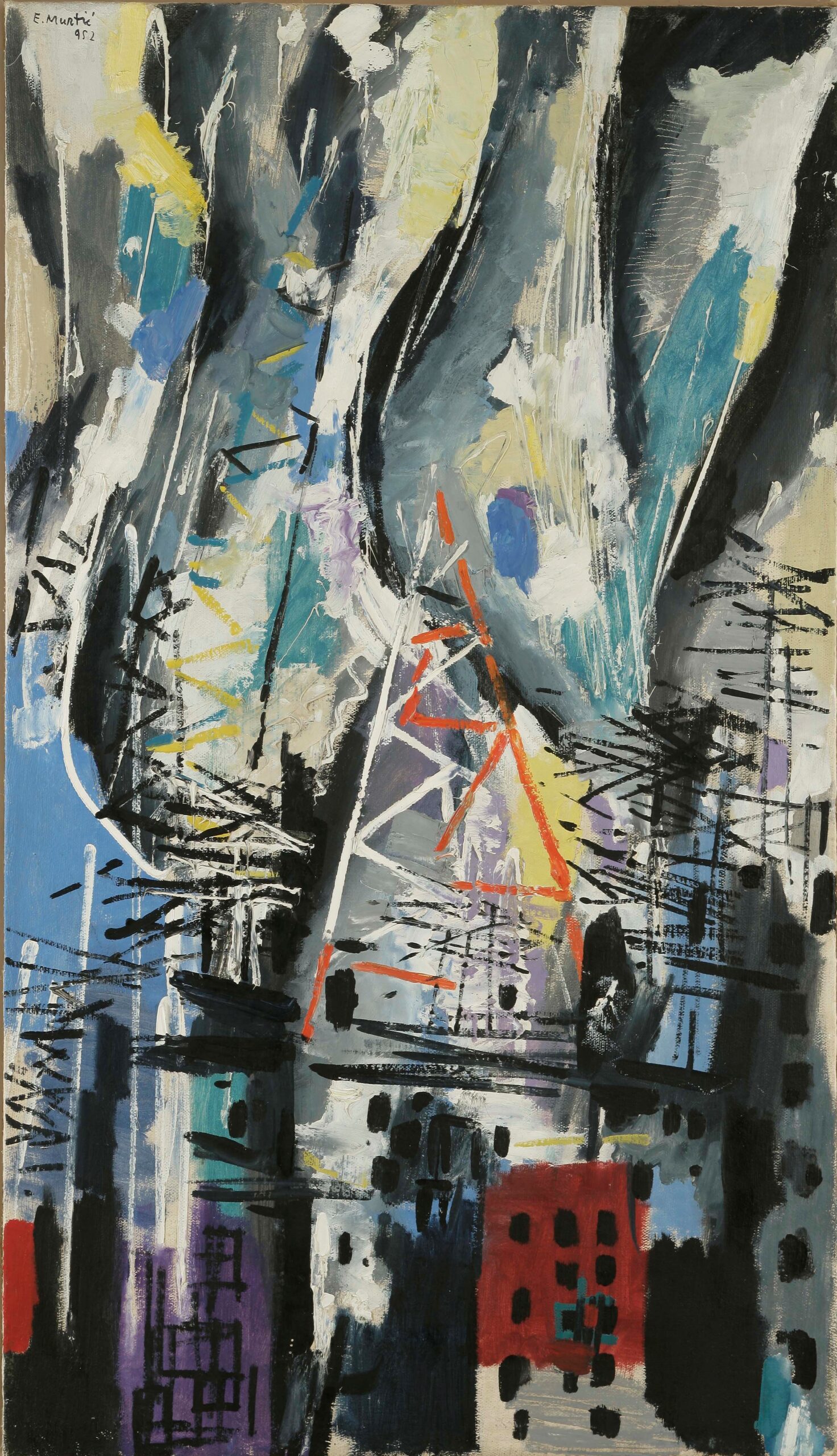 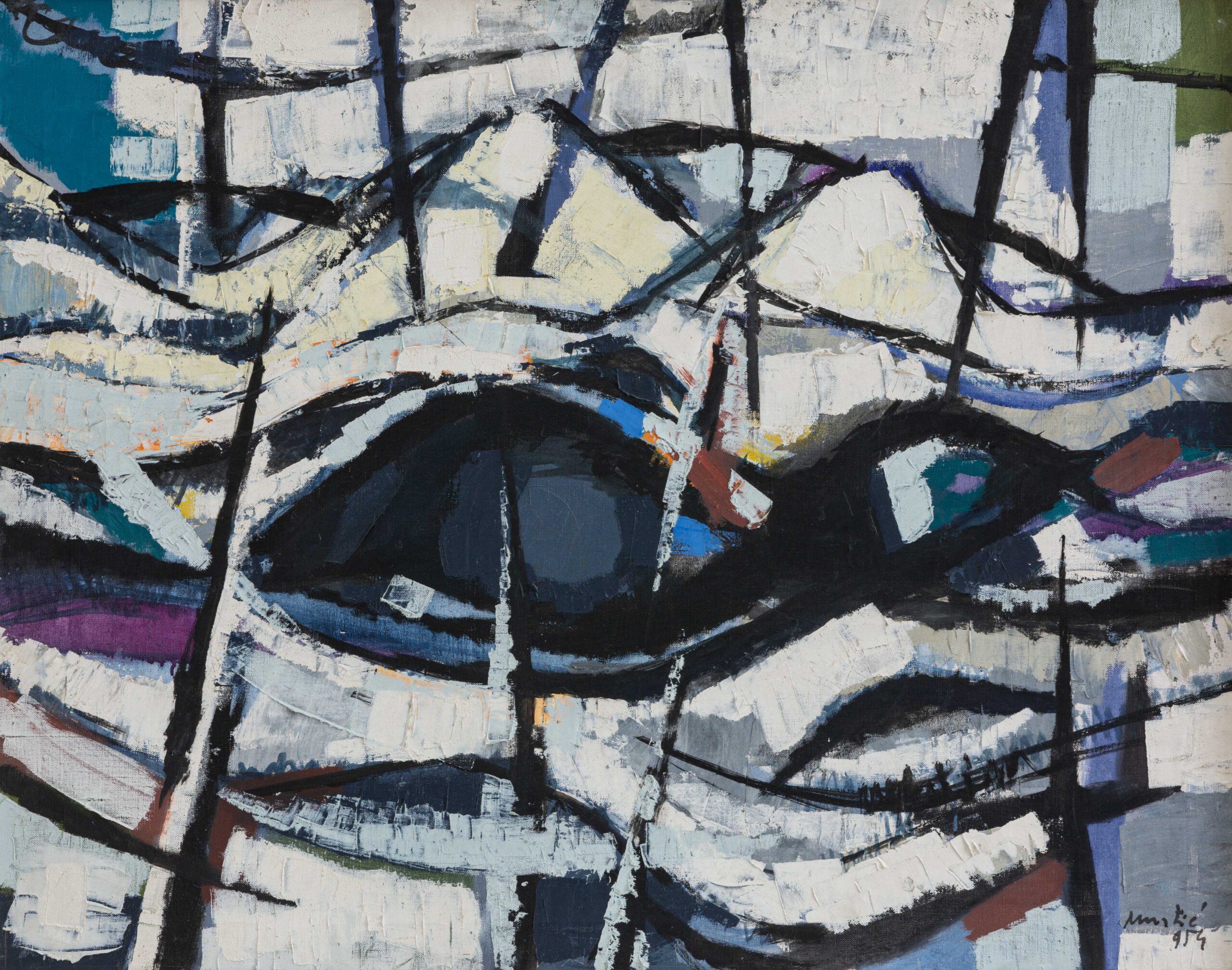 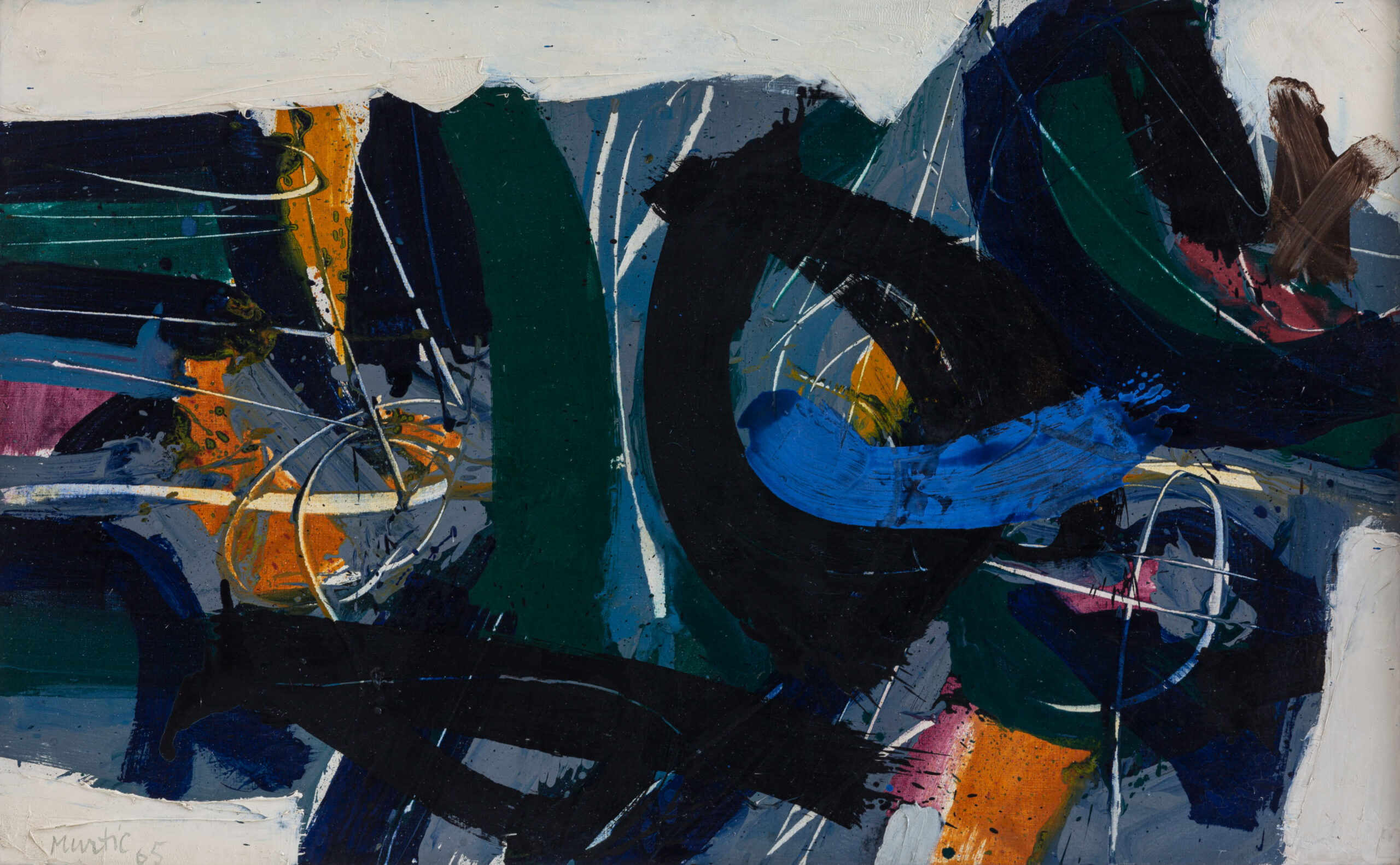 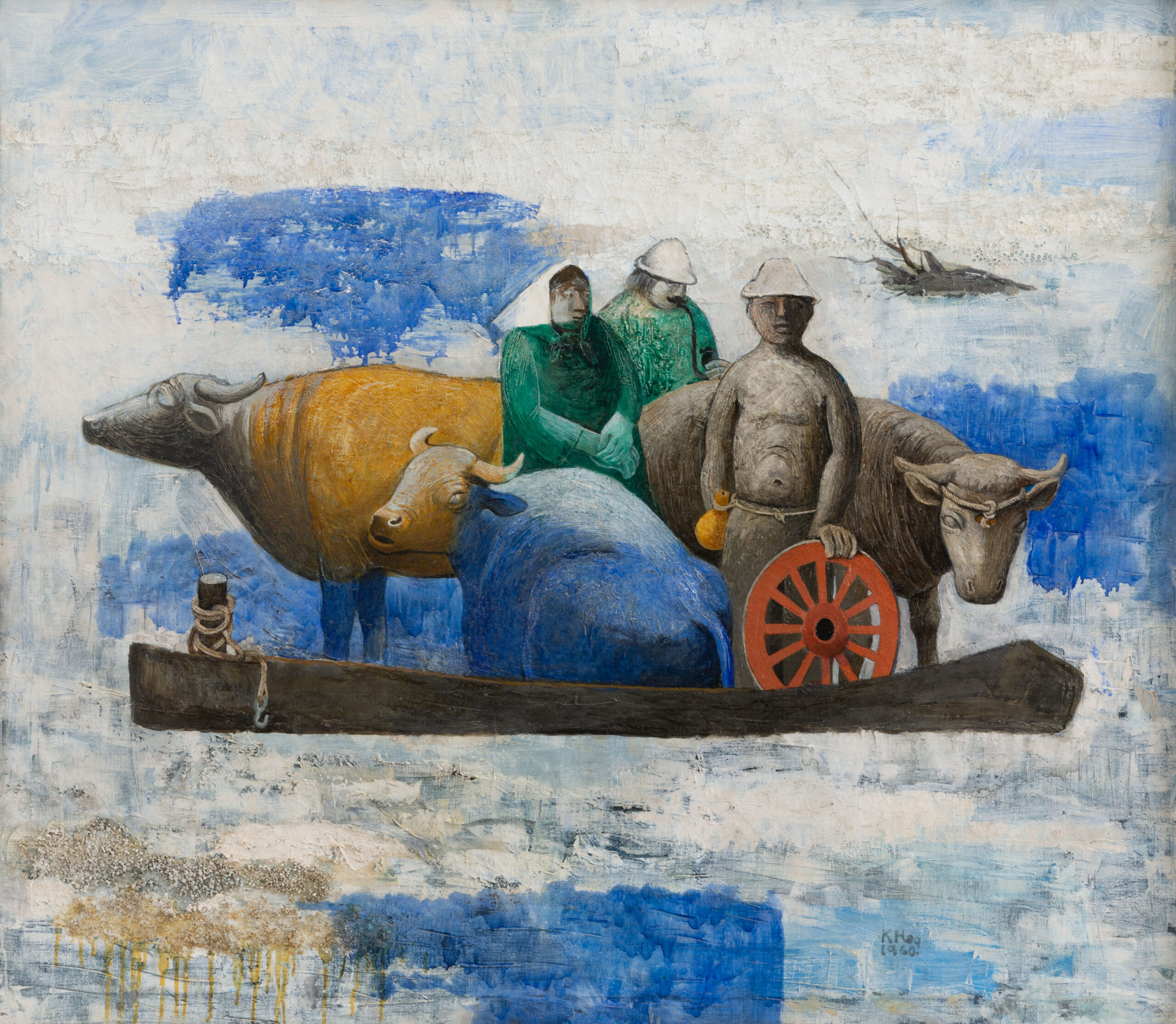 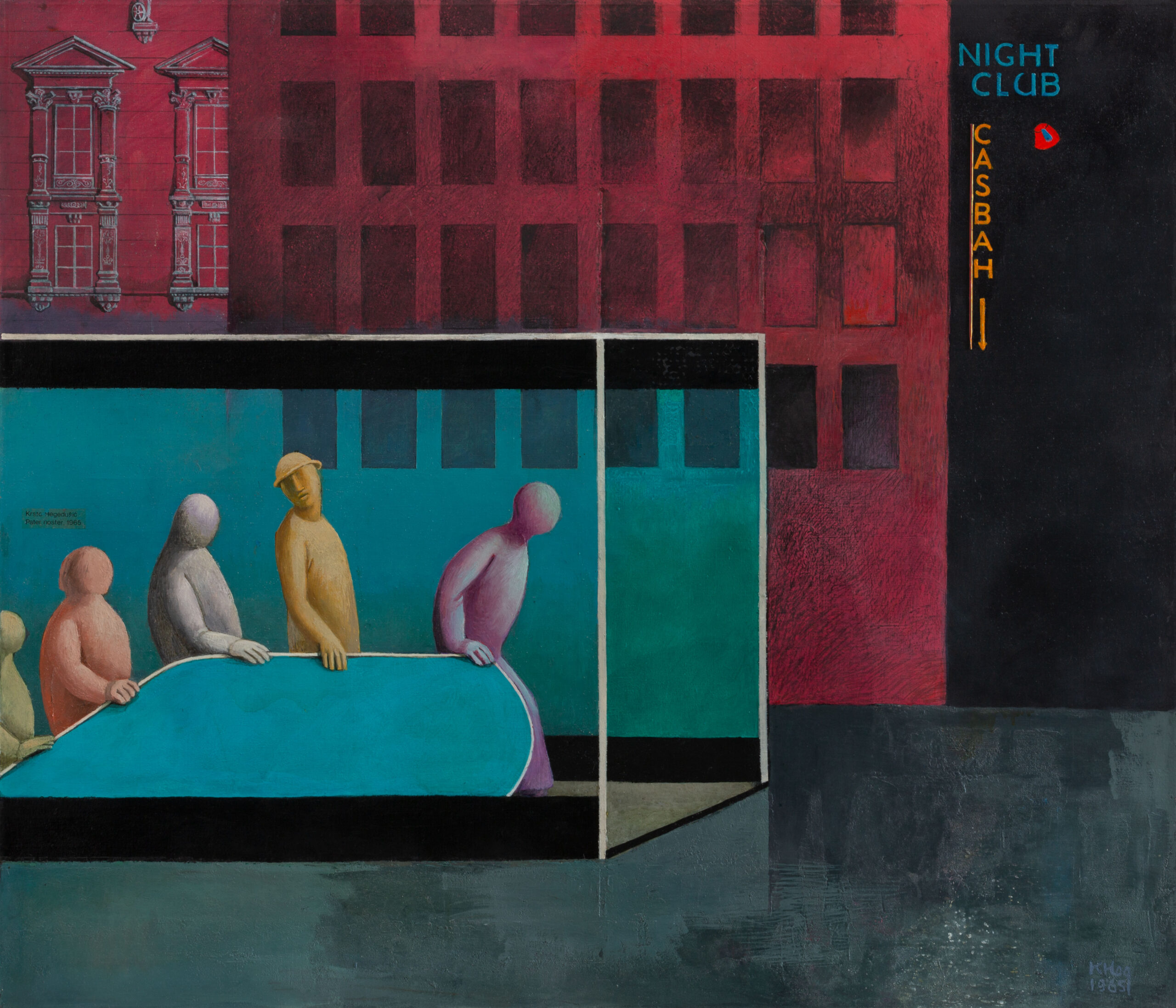 Catamaran Art 2021 features exhibitions of three luminaries of Croatian modern art: Krsto Hegedušić, Ljubo Ivančić, and Edo Murtić. The works of these strong and individual modernist voices have become the most reliable testimonies of both the existential anxiety and the optimism of their time. Each of them individually, in his specific way, in a constant search for authentic expression, knew how to creatively assimilate various currents on the contemporary art scene, from new figuration through various forms of abstraction to Art Informel. Additional impetuses to this choice of artists have certainly been the birth anniversaries of Krsto Hegedušić and Edo Murtić, as well as the fact that Hegedušić never had a solo exhibition in Split.

When Catamaran Art was announced in 2018 as a collaborative exhibition program of the Museum of Fine Arts in Split and the Jelsa Municipal Museum, it was pointed out that the project did not intend to be a one-summer hit: in other words, that its ambitions were longer-term. Although the basic concept of having three exhibitions, alternately set in the Museum of Fine Arts and the Kravata Gallery in Jelsa during the summer months, has been retained, there have been programme alterations as Catamaran Art was envisioned primarily as a platform for presenting artists and curators of the younger and middle generations. Judging by the names of this year’s exhibitors, one might think that the course of Catamaran Art has definitely been redirected to the past, especially since we have decided to exhibit works from the 1950s and 1960s. However, given that our “letter of intent” also promised openness to different generational, media, and poetic combinations, such a conclusion would be premature.

Slightly fed up with the current “favouring” of youth and the consequent hyper-production of exhibitions, we have decided to take a break and remind ourselves of a time when exhibitions were rare and thus more precious. After all, comparison is always useful, and one of the consequences of ignoring history is its repetition, as Viktor Žmegač has recently indicated, giving us the well-meaning professor’s advice to “stick our noses in literature” so as not to reinvent hot water. In our case, “literature” has been the works of artists who knew how to choose the right side of history and art in complicated and often unpleasant times. The post-war years were very challenging, both because of the strong ideological pressure exerted by the new government and because of the persistent efforts of the “deserving” artists to impose their artistic vision from a position of power. It was a time of colossally daring ventures accompanied by equally colossal misunderstandings about abstraction and figuration in theory and practice. A time when artists legitimized and asserted themselves with their work rather than an “application form”, when exhibitions that today have cult status were neither spectacles nor mere events, but engaged cultural events that provoked fierce controversies. The stakes were large, machinations and denunciations unpleasant, and the critical position was part of one’s personal integrity, not an “artistic genre”. Ivančić, Murtić, and Hegedušić, despite all accusations of subjectivism, intellectualism, and “left” or “right” formalism, persisted on their own ways, insisting on freedom of artistic expression and research. Thus, they had an immeasurable influence on the development of events that led to the accelerated dismantling of socialist-realist aesthetics and the affirmation of modernist principles and new formal techniques in Croatian art.

Krsto Hegedušić (1901-1975) graduated from the Academy of Fine Arts in Zagreb (1926) and then specialized in Paris. He is one of the founders of the association of artists Zemlja (1929-1935). He began teaching at the Academy of Fine Arts in 1937. From 1950, he led a Master Workshop of painting. He was a co-founder of the Mart group, initiated the Bulletin of the Institute of Fine Arts (1953), and encouraged the establishment of the Archive of Fine Arts and the Cabinet of Graphics. He was a member of the Yugoslav (Croatian) Academy of Sciences and Arts. In his quest for an authentic national artistic expression, he found inspiration in old masters (P. Brueghel the Elder) and contemporary European art (G. Grosz), as well as in primitive, flat stylization, decorative drawing, and the specific palette of folk art. His socially engaged compositions from the pre-war period combine tragic, satirical, and grotesque elements. The Hlebine School of Painting, founded in 1930 by Hegedušić, played a crucial role in the affirmation of the so-called naïve art. After the war, he modernized his artistic expression and expanded his motif register by including urban scenes. In the spirit of new figuration, he condensed and refined the composition, simplified his drawing, emphasized the volume, reduced the plot and the number of characters. He deliberately assimilated the current poetics of Art Informel and materic painting, mixed paint with sand, and introduced reality through collages, all with the intention of conveying existential anxiety caused by the experience of war and human loneliness in dehumanized urban spaces through enhanced expression.

Ljubo Ivančić (1925-2003) interrupted his secondary education in 1942 and joined the partisan movement. He graduated from the Academy of Fine Arts in Zagreb (1949), where he would later teach for many years (1961-1979). From 1975 to 1984, he led the Master Workshop. He was a member of the Croatian Academy of Sciences and Arts. Ivančić belonged to the narrowest circle of personalities who marked the second half of the twentieth century in Croatian art. Faithful to classical media and traditional motifs, he filled his paintings, sculptures, and drawings with the anxieties of the time and the tragedy of human existence. Ivančić is known for his meticulously cultivated art of the metier and a sublime artistic handwriting. In terms of dramatic expression, the uncompromising dissection of the human body and soul, existentialist starting points, and artistic achievements, his art reminds of his famous contemporaries such as Francis Bacon and Alberto Giacometti. Initially, he painted landscapes, vedutas, portraits, and still lifes evoking a melancholy atmosphere. In the late 1950s, his works resembled Art Informel (Traces of Man, 1959-1961), in which the materic texture made of thicker or thinner accumulations of pigment started to live its own life, bringing the scene to the brink of abstraction. At the same time, he produced a series of dark still lifes, landscapes, and distorted female nudes exuding existential anxiety. From the 1970s, the theme of a solitary figure isolated in empty space dominated his art. A special segment in his oeuvre consists of numerous self-portraits: oil paintings, drawings, and sculptures.

Edo Murtić (1921-2005) completed his secondary education at the Crafts School (1939), followed by studies at the Academy of Fine Arts in Zagreb and Petar Dobrović’s painting course in Belgrade (1940-1941). At the beginning of 1944, he joined the partisans, where he and Zlatko Prica organized a lithographic printing house. He was a co-founder of the Mart group and the Forum Gallery in Zagreb. He was a regular member of the Croatian Academy of Sciences and Arts. Initially he painted portraits, interiors, and still lifes in the spirit of coloristic intimacy and realism, but in the Adriatic Cycle (1944-1951) the motifs of coastal cities and landscapes were painted in an almost post-impressionist colour gamut. His stay in the USA and Canada (1951-1952) inspired the famous cycle of paintings Experiencing America, created under the impression of the gestural painting of abstract expressionism and the estranged vistas of New York. The still present motifs in his landscape painting were eventually reduced to mere chromatic associations or completely disappeared, turning the painting into an abstract coloristic synthesis of accentuated expressiveness. In addition to abstract expressionism and lyrical abstraction, he was close to Art Informel for a while. From the mid-1980s, in the cycles First Summer, Second Summer, and Fire, he revisited figurative expression by painting sea bays, vineyards, gardens, and olive groves in a luscious and luxurious palette, only to return to abstraction in compositions of spontaneous gesturality at the turn of the millennium. His oeuvre includes large wall decorations, mosaics, tapestries, enamels, ceramics, posters, and stage sets.

Author of the concept: Božo Majstorović